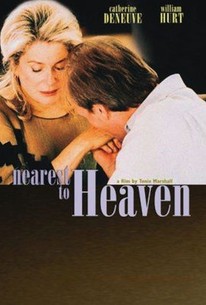 A middle-aged Frenchwoman is either experiencing delusions of grandeur or the full force of destiny in director Tonie Marshall's 2002 romantic drama Nearest to Heaven (Au Plus Pres Du Paradis). When single non-fiction book author Fanette (Catherine Deneuve) accidentally bumps into former schoolmate Bernard (Bernard Le Coq) -- who was smitten with Fanette in school but whose affection remained unrequited -- she is reminded of another man whom she loved intensely. This other man, Philippe, left a huge impression on Fanette as she begins to lose herself in reminiscences over the brief, intense relationship the two experienced. After catching a number of screenings for the 1957 film An Affair to Remember -- which was also Fanette and Philippe's favorite film during their fling -- Fanette gets the notion from what may or may not be a figment of her imagination to go to New York and visit the observation deck of the Empire State Building. Setting out under the pretense of putting the finishing touches on her latest book, she arrives in the States and discovers her usual photographer has been replaced by the single and somewhat attractive male photographer Matt (William Hurt) -- which further confuses Fanette when she eventually develops feelings for him. ~ Ryan Shriver, Rovi

Emmanuelle Devos
as Woman in cinema

Francois Arnal
as Himself
View All

Critic Reviews for Nearest to Heaven

Audience Reviews for Nearest to Heaven

There are no featured audience reviews for Nearest to Heaven at this time.