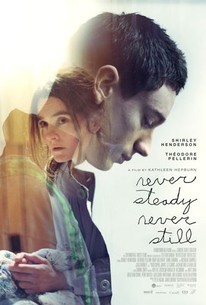 Subtle, slow, and nearly unbearably sad, Never Steady, Never Still lives and dies in its performances -- and thankfully, the soft-spoken strength of Shirley Henderson is enough to keep a steady pulse.

NEVER STEADY, NEVER STILL, the feature film debut of Kathleen Hepburn, is a tender and heartbreaking story of a physically disabled mother and discontent son -- each alienated from their world and struggling to manage in the face of grief, guilt and chronic disease. Having lived with Parkinson's Disease for almost two decades, Judy is faced with the heightened challenges of daily life when tragedy strikes on their isolated property on the shores of Stuart Lake. Meanwhile, her teenage son, pushed by his father to get a job on the oil fields, is grappling with the daunting task of becoming a man in world that has no apparent room for weakness. At its core, this is story of a mother's guilt at not being able to be the protector she feels she should be, and a son's overwhelming fear of never being enough -- both longing for the forgiveness of the other and debilitated by self-imposed emotional isolation.

Jurassic World: Fallen Kingdom Is Less Than Dino-Mite
View All

There are no featured audience reviews for Never Steady, Never Still at this time.