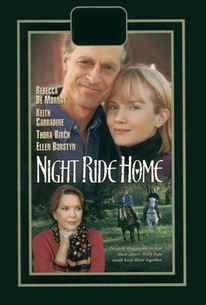 Based on the novel by Barbara Esstman, this made-for-TV drama concerns Neal (Keith Carradine) and Nora (Rebecca DeMornay), a married couple who run a horse ranch. Neal and Nora have slowly but surely drifted apart; while they still live together, they no longer feel that they have anything to say to each other. Nora dotes on their 17-year-old son Simon (Jordan Brower), while Neal has bonded with his daughter, 15-year-old Clea (Thora Birch). One day, Simon is killed in a riding accident, which throws Nora into a severe depression. Nora's mother Maggie (Ellen Burstyn), along with Neal, struggle to reach out to Nora for the first time in years, as Nora, who blames herself for Simon's death, tries to persuade Neal to sell the ranch and leave behind the life they've known all their lives. Night Ride Home was the 200th production shown as part of the acclaimed dramatic anthology series Hallmark Hall of Fame.

There are no critic reviews yet for Night Ride Home. Keep checking Rotten Tomatoes for updates!

There are no featured audience reviews for Night Ride Home at this time.