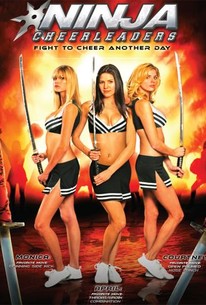 Trained to kill but determined to cheer their school's team to the championship game, three lethal cheerleading ninjas must put down their pom poms and pick up their katanas when their sensei is abducted by the mob. April, Courtney, and Monica may just be college freshmen, but they can take out an army of ninja assassins with the skill of an ancient master. Schooled in the ancient martial arts by the esteemed Sensei Hiroshi (George Takei), these three beauties spend their days in the classroom and their nights in the strip club - where they work the poles to pay for their college tuition. Then one day, Sensei Hiroshi is abducted and their lives are suddenly turned upside down. Now, in order to rescue their master, April, Courtney, and Monica will have to summon the skills he once taught them and take on a virtual army of mob assassins. With a nosy cop closing in on one side and suspicious parents asking questions on the other, these girls will have to work overtime in order to keep anyone from finding out what kind of destruction they're truly capable of.

Max Perlich
as Jimmy the Snitch