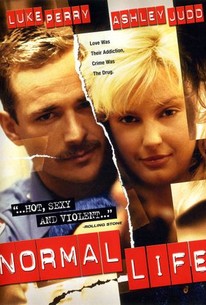 A seemingly ordinary couple jump the tracks into disaster in this drama based on a true story. Chris Anderson (Luke Perry) is a straight-arrow cop who meets Pam (Ashley Judd) after she's hurt in a barroom fight. He asks her to dance after helping to stop her bleeding, and it's love at first sight. While Chris plays by the rules, Pam likes to drink, smoke dope, spend money, and cause trouble, and while he wants to make her happy, her emotional instability makes this no easy task. After Chris is fired and takes a job as a security guard, he can no longer pay the bills that Pam is ringing up. He uses his knowledge of security systems to rob banks, and he discovers that he's good at it. Pam eventually finds out about Chris' sideline; the prospect of danger excites her sexually, and she insists on joining in for future robberies, goading him into a crime spree that leads to tragedy. While Normal Life was planned as a theatrical release, the film debuted on premium cable after disputes between the studio and director John McNaughton; despite this, the film earned positive reviews and a cult following.

Bruce A. Young
as Agent Parker

Bryan McCann
as Justice of the Peace

Brian McCann
as Justice of the Peace

Stacy Logan
as Becker
View All