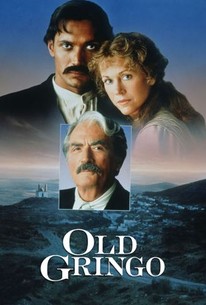 In this historical drama based on Carlos Fuentes' novel, Harriet Winslow (Jane Fonda) is a naive woman who, hoping to broaden her horizons, accepts a job as a governess in Mexico in 1913. However, Harriet unknowingly finds herself thrown into the middle of the Mexican revolution, where she attracts the attentions of two very different men: an elderly American gentleman (Gregory Peck) who has come to Mexico to die, and Tomas Arroyo (Jimmy Smits), a general with Pancho Villa's army of rebels who is fighting for the freedom of his people. The American's attraction to Harriet is more intellectual (though he unmistakably finds her attractive), while Arroyo holds a greater romantic allure to Harriet, who is still a stranger to the ways of love. In time, she gains a new sense of freedom and self-knowledge in Mexico, but while the victories of Villa's forces bring out an unseemly arrogance in Arroyo, Harriet makes a surprising discovery about the Old Gringo -- that he is in fact the fabled author Ambrose Bierce, who vanished years before. Old Gringo was the first American film for director Luis Puenzo, and the next-to-last for star Jane Fonda.

Alicia del Lago
as His Wife

Jorge Zepeda
as Administrator of Hacienda

Stewart Smith
as Journalist with Glasses