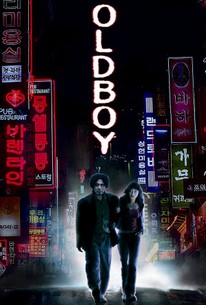 Violent and definitely not for the squeamish, Park Chan-Wook's visceral Oldboy is a strange, powerful tale of revenge.

South Korean filmmaker Park Chan-wook directed this violent and offbeat story of punishment and vengeance. Oh Dae-su (Choi Min-sik) is a husband and father whose reputation for womanizing is well known. One day, for reasons he doesn't understand, Oh Dae-su finds himself locked up in a prison cell, with no idea of what his crime was or whom his jailers may be. With a small television as his only link to the outside world and a daily ration of fried dumplings as his only sustenance, Oh Dae-su struggles to keep his mind and body intact, but when he learns through a news report that his wife has been killed, he begins a long and difficult project of digging an escape tunnel with a pair of chopsticks. Before he can finish -- and after 15 years behind bars -- Oh Dae-su is released, with as little explanation as when he was locked up, and he's soon given a wad of money and a cellular phone by a bum on the street. Emotionally stunted but physically strong after 15 years in jail, Oh Dae-su struggles to unravel the secret of who is responsible for locking him up, what happened to his wife and daughter, and how to best get revenge against his captors. Oldeuboi was screened in competition at the 2004 Cannes Film Festival and won the coveted Grand Prix.