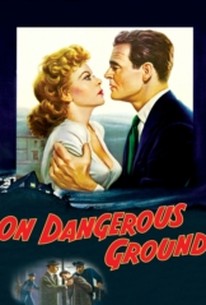 Robert Ryan plays Jim Wilson, a tough police detective embittered by years of dealing with low-life urban scum, in Nicholas Ray's moving film noir. After severely beating several suspects, Jim is assigned to a case far from the city to find the killer of a young girl. Joining the manhunt, in snow-covered terrain, Wilson finds himself paired with the victim's father, Walter Brent (Ward Bond), who plans to shoot the killer himself. When the two men come upon a cabin occupied by Mary Malden (Ida Lupino), a blind woman who is also the killer's sister, Wilson's life is changed forever. Mary, a generous and loving person who has cared for her mentally ill brother Danny (Sumner Williams) since the death of their parents, convinces Wilson to protect Danny from Brent. Wilson also promises to get help for Danny if he surrenders to him. Inspired by Mary's courage and recognizing Brent's rage as the mirror image of his own, Wilson gains the insight to free himself from his own blindness. The film includes a memorable score by Alfred Hitchcock favorite Bernard Herrmann. ~ Rovi

Nita Talbot
as Woman in Bar

Joan Taylor
as Hazel
View All

Critic Reviews for On Dangerous Ground

Audience Reviews for On Dangerous Ground