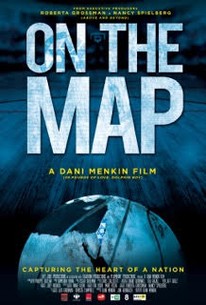 On the Map Ratings & Reviews Explanation

On the Map Photos

Hey Jude Productions is proud to present the US Theatrical release of ON THE MAP, a documentary film written and directed by Israeli Academy Award winning filmmaker Dani Menkin (39 Pounds of Love, Dolphin Boy, Is That You?), produced by Dani Menkin and Jon Weinbach (The Other Dream Team, Kareem) and executive-produced by Roberta Grossman (Above and Beyond, Hava Nagila) and Nancy Spielberg (Above and Beyond). The film will open at Laemmle Theaters in Los Angeles on November 25, and at Cinema Village in New York on December 9. A national release will follow. ON THE MAP tells the against-all-odds story of Maccabi Tel Aviv's 1977 win of the European Cup. Through the conduit of sports, ON THE MAP presents a much broader story of Israel and the Jewish people during the Cold War. The film recounts how the underdog Israeli basketball team prevailed over CSKA Moscow (known in the West as "Red Army") - a team that refused to play against Israel. Moments after this highly charged and historical win, Israeli-American basketball hero Tal Brody captured the heart of the young nation when he famously said, "Israel is ON THE MAP, not just in sport, but in everything." Told through the eyes of six American basketball players who joined Maccabi Tel Aviv and helped shape the team that beat Russia, and featuring interviews with NBA iconic legends Bill Walton and  David Stern, ON THE MAP combines the pulse pounding action of a high-stakes game with an incendiary political situation to deliver a film that mesmerizes fans of the game and captures the spirit of a nation triumphant against all odds. ON THE MAP also features interviews with Michael Oren and Natan Sharansky, among others.

Critic Reviews for On the Map

Audience Reviews for On the Map

There are no featured audience reviews for On the Map at this time.

On the Map Quotes