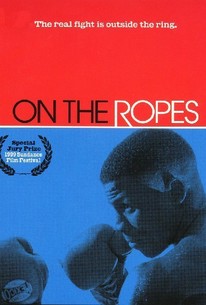 On the Ropes Ratings & Reviews Explanation

On the Ropes Photos

The dreams and struggles of three aspiring boxers and the trainer who works with them (at the same Bed-Stuy gym where Mike Tyson used to work out) form the basis of On The Ropes, a documentary that debuted at the 1999 Sundance Film Festival. Noel Santiago, a one-time gang member, has the skills to be a good boxer, but lacks the conviction to work through the struggles involved. George Walton, a Golden Gloves champ, had his shot at a professional career but lost it at the hands of a crooked manager and is looking for a second chance. Tyrene Manson, a fiercely determined female boxer, sees fighting as her best chance to escape poverty until she's arrested during a drug raid on her uncle's home. And trainer Harry Keitt, a former fighter himself who once sparred with Muhammad Ali, tries to live down a history of alcoholism and a stretch in prison as he walks a fine line between nurturing the talents of the young people he cares for and trying a grab a percentage of the money they could earn as champions.

Critic Reviews for On the Ropes

Audience Reviews for On the Ropes

On the Ropes Quotes