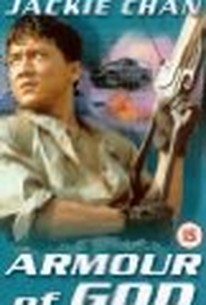 Jackie Chan takes a break from police thrillers featuring kung-fu and wild stunts to star and direct this action-adventure yarn featuring kung-fu and wild stunts. Chan plays Jackie, aka the Asian Hawk, an Indiana Jones-style adventurer looking to make a fortune finding exotic antiquities. After discovering a mysterious sword in Africa, a band of Satan-worshipping monks kidnap Jackie's ex-girlfriend Lorelei (Rosamund Kwan), demanding as ransom the sword and other pieces of the legendary Armour of God -- a reportedly magical outfit dating back to the Crusades. He manages to get the objects in question from wealthy collector Bannon (Bozidar Smiljanic), and together with Bannon's daughter May (Lola Forner) and, of course, Hong Kong rock star Alan (Alan Tam), the three head out to rescue Lorelei. When they do, they discover too late that she has been brainwashed. She drugs Alan, taking him and the armor back to the monastery. Jackie is forced to take on an army of satanic monks single-handedly. This film is perhaps best remembered as the shoot that almost killed Jackie Chan. While jumping from one tree to another, he slipped and plunged almost 40 feet landing on his head. True to hallowed Hong Kong tradition, that outtake along with dozens of others is included at the end of the film. This film was released in the States under the misleading title Operation Condor 2: The Armour of the Gods, even though the supposed original Operation Condor was made four years afterwards. ~ Jonathan Crow, Rovi

Lola Forner
as May