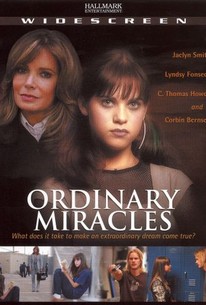 A belief in "angels on earth," not to mention a belief in oneself, may enhance the enjoyment of this made-for-cable drama. Jaclyn Smith stars as Kay Woodbury, a tough, no-nonsense judge whose intractability in legal matters is intensified by a number of personal crises, including a bitter feud with her jurist father and her anguish over the recent remarriage of her ex-husband. Thus, Kay is no mood to play nice when teenager Sally Powell (Lyndsy Fonseca) is brought before her. Harboring an intense hatred for the father who apparently abandoned her, Sally is a seemingly incorrigible delinquent who has already "flunked out" in four foster homes. Figuring that she could no worse than anyone else, Kay takes Sally home on a trial basis. The girl proceeds to behave as atrociously as possible, but surprisingly Kay does not decide to write her off as a bad job, but instead concludes that what the girl needs is someone to trust and something to believe in. In this spirit, Kay locates Sally's birth father (C. Thomas Howell), and, upon being convinced that he was not motivated by selfishness when he dropped out of his daughter's life, secretly contrives for Sally and her dad to reconnect -- and in so doing Kay finds her own way toward forgiveness, not only of those whom she feels have wronged her, but also of herself. Ordinary Miracles made its Hallmark Channel debut on May 7, 2005.

Joe Whipp
as Doctor
View All

There are no critic reviews yet for Ordinary Miracles. Keep checking Rotten Tomatoes for updates!

There are no featured audience reviews for Ordinary Miracles at this time.