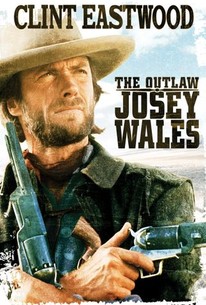 Recreating the essence of his iconic Man With No Name in a post-Civil War Western, director Clint Eastwood delivered the first of his great revisionist works of the genre.

Clint Eastwood's fifth film as a director and eighth Western as a star (ninth if you count Paint Your Wagon), The Outlaw Josey Wales chronicles the hero's violent journey westward after the Civil War. With fresh memoris of his family's slaughter by Red Leg soldier Terrill (Bill McKinney), Confederate Josey Wales (Eastwood) refuses to join his captain Fletcher (John Vernon) and the rest of his comrades in surrender to a U.S. Army regiment. Deemed a dangerous outlaw after a bloody one-man battle with that regiment, Josey is pursued by U.S. cavalry soldiers led by the unwilling Fletcher and the murderous Terrill, as well as by bounty hunters who eventually learn how coolly lethal Wales can be. Despite his desire to remain a lone fugitive, Josey soon has a crew of travelling companions that includes Cherokee Lone Watie (Chief Dan George) and the pretty Laura Lee (Sondra Locke) and her vigorous Grandma Sarah (Paula Trueman), settlers on their way to a ranch near ghost town Santa Rio. The few Santa Rio residents welcome the group, but their peace and Josey's burgeoning romance with Laura Lee are soon interrupted by Terrill's arrival. A skillfully violent man of few, well-chosen words, Josey Wales resembles Eastwood's previous Western heroes in Sergio Leone's trilogy, A Fistful of Dollars (1964), For a Few Dollars More (1965), and The Good, the Bad, and the Ugly (1966). However, the emphasis on friends and family served notice that, in the words of one critic, "the Man With No Name doesn't live here anymore." Indeed, Josey Wales would be Eastwood's last western before 1985's Pale Rider. Although it did not garner similar critical praise when it was released, Eastwood considers The Outlaw Josey Wales to be the equal of the Oscar-winning Unforgiven (1992). ~ Lucia Bozzola, Rovi

Will Sampson
as Ten Bears

Danny Green
as Lemuel
View All