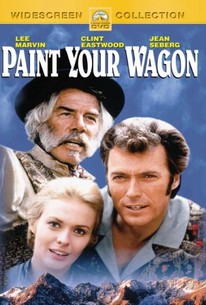 After a debut on Broadway in 1951, Paramount spent an estimated 17 to 20 million dollars in production costs for this Lerner and Loewe musical. With Loewe's permission, Lerner wrote five additional tunes for the film with Andre Previn. Ben Rumson (Lee Marvin) is the grizzled prospector trying his luck panning for gold in California. Pardner (Clint Eastwood) is his companion. When Ben buys a woman from a Mormon, Elizabeth (Jean Seberg) expects equal rights for her gender and chooses to live with both men. Ben and Pardner tunnel under the boomtown to gather the fallen gold dust that has filtered through the cracks of the saloon and other places. The musical comedy features 13 songs, the most recognizable being "They Call The Wind Maria". The Nitty Gritty Dirt Band helps out on the song "Hand Me Down That Can O' Beans". Both Clint Eastwood and Lee Marvin are given a chance to show their vocal ability (or lack of it) in several songs. The initial release fell far short of regaining the millions put into the production, and most critics dipped their pens in poison to pan the picture -- though the film plays better than the critics would lead anyone to believe. Many jumped on the Paint Your Wagon smear campaign after the film proved to be not nearly as successful as other musicals.

Critic Reviews for Paint Your Wagon

Audience Reviews for Paint Your Wagon