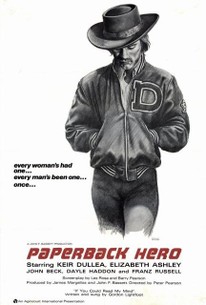 A small-time athlete is suddenly confronted by the real world in this thoughtful comedy drama from Canada. Rick (Keir Dullea) is the star player on a semi-pro hockey team in a small town on the Canadian prairie. While Rick has to hold down a job in a hardware store to pay his rent, his skills on the ice make him a local hero; he never has to pay for a beer or a meal if he doesn't want to, and he makes as much time as he wants with a number of women, though his loyal girlfriend Loretta (Elizabeth Ashley) is still convinced he'll settle down and marry her one day. To go along with his minor celebrity, Rick has constructed an outsized persona for himself, wearing a cowboy hat, carrying a pistol, and grooming himself in the model of Sheriff Matt Dillon from Gunsmoke. But Rick's world begins to fall apart when he first loses his job and then gets word that his team's owners can't afford to keep the franchise going. After the team's final game turns into an angry brawl and Rick is rejected by Joanna (Dayle Haddon), the college-age daughter of the team's manager, Rick takes a final stand in a foolish bid to prove himself. ~ Mark Deming, Rovi

Max Bentley
as Max
View All

There are no critic reviews yet for Paperback Hero. Keep checking Rotten Tomatoes for updates!

There are no featured audience reviews for Paperback Hero at this time.