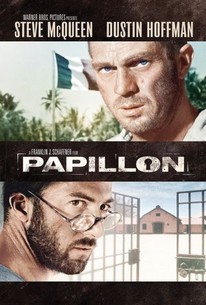 The autobiography of Henri Charriere, one of the few people to successfully escape from the notorious French penal colony of Devil's Island, served as the basis for Papillon. Steve McQueen plays the pugnacious Charriere (known as "Papillon," or "butterfly," because of a prominent tatoo), incarcerated--wrongly, he claims--for murdering a pimp. He saves the life of fellow convict Louis Dega (Dustin Hoffman), a counterfeiter who will later show his gratitude by helping Charriere in his many escape attempts, and by smuggling food to Charriere when the latter is put in solitary confinement. One breakout, which takes Charriere and Dega to a leper colony and then to a native encampment, is almost successful, but Charriere is betrayed (allegedly because he stopped for an act of kindness) and back the prisoners go to French Guiana. Years later, Dega is made a trustee and is content with his lot, but the ageing, white-haired Charriere cannot be held back. A tribute to the unquenchability of the human spirit, Papillon brought in an impressive $22 million at the box office. ~ Hal Erickson, Rovi

Parasite Star Song Kang-ho’s Five Favorite Films
Sherlock Season 4, Master of None Season 2, Enemy of the State, and More on Netflix This Week
View All