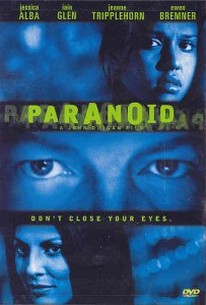 A woman looking for a relaxing weekend instead finds her safety at stake in this psychological thriller. Chloe (Jessica Alba) is a famous model who is feeling stressed after a working trip to the U.S. -- where she'd been dogged by a persistent telephone stalker. While Chloe has a beau, she decides spontaneously to join Ned (Gary Love), a rock musician she's met, as he heads out to the British countryside for the weekend. Upon arrival, Chloe discovers that Ned already has guests -- washed-up rock star Stan (Iain Glen), his bickering wife Rachel (Jeanne Tripplehorn), their deaf-mute daughter Theresa (Mischa Barton), and nerdy hanger-on Gordon (Ewen Bremner). As the emotional chemistry of the visitors becomes volatile, Ned's wife arrives and most of the other guests take off, leaving Chloe alone with her host and his spouse. Chloe soon discovers that Ned and his friends have a disturbing hobby -- they like to bring women back to the house, drug them, and violate them while unconscious, leaving her to wonder if she's next for this treatment. Paranoid was written and directed by noted Australian filmmaker John Duigan. ~ Mark Deming, Rovi

Kevin Whately
as Clive
View All

There are no featured audience reviews for Paranoid at this time.