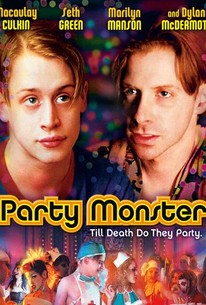 Set in the New York club scene of the late 1980's thru the 1990's, a tale which chronicles the rise and fall of "club-kid" promoter Michael Alig, a party organizer, whose extravagant life was sent spiraling downward when he boasted on television that he had killed his "friend", roommate, and drug dealer, Angel Melendez. Originally from Indiana, Alig moved to New York, and came to be an underground legend, known for his excessive drug use and outrageous behavior in the club world. At his peak, he had his own record label, and magazine, and hosted Disco 2000, one of the biggest club nights in New York in the '90s. He was doing a lot of drugs, and as his addiction got worse, his party themes became darker and more twisted. Alig's saga reached its tragic crescendo when he viciously murdered his drug dealer, Angel, by injecting him with Drano and throwing him in the East River. The power he wielded on the club scene made him feel untouchable, so he didn't hesitate to boast of the murder. The press thought it was a publicity stunt--until Angel's body washed ashore.

Manny Perez
as Johnny
View All

Trailer Bulletin: Employee of the Month
In Other News…Natasha Lyonne, Brad ‘n Jen, and Kirsten ‘n Jake
View All