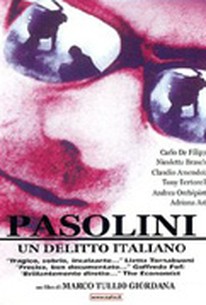 Pier Paolo Pasolini was a beloved Italian filmmaker, poet and novelist whose murder in 1975 threw the whole nation into shock. This drama attempts to document the killing and the aftermath while exploring the true motives for the killing. The film opens as the police are in hot pursuit of a car racing along the waterfront of Ostia. At the end of the chase they end up arresting one Pino Pelosi, a male prostitute who confesses to bludgeoning the director to death and running him over with a car. The initial evidence goes along with Pelosi's story. Intermingled with the drama is actual police and press footage of the murder scene, the trial and other related events. As the court goes to trial, it soon becomes apparent that Pelosi is not telling the whole truth. Despite the findings of the media, the police and the lawyers seem to be in an inordinate hurry to close the case and dismiss it as yet another gay killing. Although the film avoids making elaborate postulations about the whole truth of the killing, it does not deny the fact that Pelosi did not act alone. Unfortunately, though Pelosi was imprisoned for his crime, he refused to reveal the identities of the others involved. ~ Sandra Brennan, Rovi

There are no featured audience reviews for Pasolini, un delitto italiano (Pasolini, an Italian Crime) (Who Killed Pasolini?) at this time.