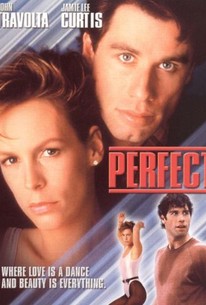 Based on a series of Rolling Stone articles by Aaron Latham, this romance was set in the world of L.A.'s hip fitness scene. Rolling Stone reporter Adam Lawrence (John Travolta) comes to L.A. to write a story about a prominent businessman who's been arrested for drug dealing (shades of the John DeLorean scandal). He's also decided to research a piece on the exercise fad and how health clubs have become the "singles bars of the '80s." His boss (real-life Rolling Stone editor Jann Wenner as himself) OK's the project. At a club called The Sports Connection, an incognito Adam meets the regulars, including promiscuous Linda (Laraine Newman), airhead Sally (Marilu Henner) and aerobics instructor Jessie (Jamie Lee Curtis), a former Olympic swimmer. Adam and Jessie begin a romance, but it ends when she discovers that he's there to trash her and the club in print. Conflicted, Adam wrestles with publishing the story, but the final decision isn't his. A director of sincere, sober dramas, James Bridges was an odd choice to helm the romantic Perfect (1985), widely considered one of the decade's notorious cinematic misfires. Bridges had enjoyed much greater success with his previous collaboration with Travolta, Urban Cowboy (1980).

Kai Maxwell
as Herself

Kevin Boyle
as Himself

Carly Simon
as Herself