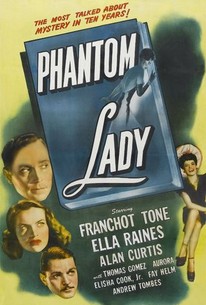 Engineer Scott Henderson (Alan Curtis) is at a seedy midtown Manhattan bar early one evening, drowning his sorrows over a failed marriage, when he strikes up a conversation with a woman (Fay Helm). She's well dressed, with a very ornate hat topping off her ensemble, and also seems even sadder and more lost than he is. Henderson persuades her to join him in taking advantage of the two theater tickets he has. They attend the show -- a song-and-dance showcase by a Brazilian artist (Aurora) -- and then part company without ever exchanging names. He returns home to find three detectives in his apartment and his wife strangled. Inspector Burgess (Thomas Gomez) questions Henderson and tries to verify his alibi, but no one -- not the bartender, the cabbie who hauled them to the theater, or the drummer in the band who was watching her -- admits to remembering the woman. Henderson can't prove that he was elsewhere when his wife was strangled and is convicted of murder and sentenced to death. His assistant, Carol Richman (Ella Raines), who has watched all of this happen, can't sit by while Scott is destroyed, and decides to get at the truth, joined by Inspector Burgess, who now believes Henderson to be innocent. Carol hounds the bartender (Andrew Tombes) until he seems ready to crack, but before he talks, he tries to get away from her and dies in an accident. The drummer, Cliff Milburn (Elisha Cook Jr.), proves more talkative and reveals that someone paid him 500 dollars to forget about the woman, but before Burgess can question him, he's strangled. It seems as though there's no hope left, even with the added help of Jack Marlow (Franchot Tone), Scott's best friend, newly returned from Brazil, when Carol gets a line on the unusual hat the woman was wearing. She traces the hat to its owner in a mansion on Long Island, where she is recovering from a breakdown over the death of her fiancé -- that was her trouble on the night she crossed paths with Scott Henderson. It is only on returning to New York, while awaiting Burgess' arrival, that she realizes that Jack Marlow is the murderer -- that he returned after having dinner with them, following their fight, and strangled Henderson's wife; paid off the bartender, the cab driver, and Cliff Milburn to keep them from revealing the existence of the woman that Scott was with; and killed Milburn to prevent him from talking; and he plans to kill Carol before she can talk to Burgess. ~ Bruce Eder, Rovi