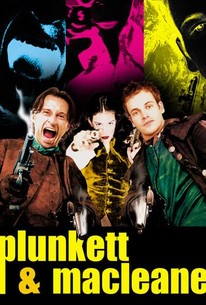 A historical comedy that applies a 1990's mindset to a tale of crime in the 1740's, Plunkett and Macleane stars Robert Carlyle as Will Plunkett and Jonny Lee Miller as Capt. James Macleane. Plunkett is a druggist who has gone broke and turned to robbery to pay his bills, while Macleane was a minor member of the aristocracy who has resorted to similar means to support himself. The two meet while serving time in prison, and after comparing notes they set out together for a career in crime. They soon discover they make a good team; Plunkett understands the nuts and bolts of theft well enough, while Macleane has the charm and connections to get them into places where they might find things worth stealing. When Macleane manages to wrangle an invitation to a night of gambling at the estate of Lord Rochester (Alan Cumming), he uses the occasion to his advantage, making the acquaintance of the lovely Rebecca (Liv Tyler) at the party and donning a mask to relieve her of her winnings on the way home. The charm and panache with which the pair commit their crimes give them a widespread reputation as "The Gentlemen Highwaymen," but Rebecca's uncle, Lord Chief Justice Gibson (Michael Gambon) is not amused, and when an especially ruthless lawman, Chance (Ken Scott), is sent on their trail, Plunkett is eager to quit while he's ahead and flee the country. Macleane, however, is too busy wooing Rebecca to listen to reason. Plunkett and Macleane is the first feature film from director Jake Scott, who has a background in commercials and music videos and is now moving forward in the family business -- his father is Ridley Scott, while his uncle is Tony Scott. If you think you've seen leading men Carlyle and Miller together before, you have -- they were also co-stars in Trainspotting.

Robert Carlyle
as Will Plunkett

Dana Jurzova
as Dutchess of Stoke

Annabel Brooks
as Widow with Garter