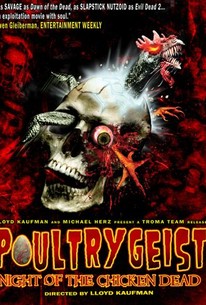 Poultrygeist: Night of the Chicken Dead

Poultrygeist may be relentlessly tasteless and juvenile, but it's also a lively slice of schlocky fun.

For anyone who has ever felt genuine fear while pondering what's really in that oddly shaped chicken nugget they're about to consume, director Lloyd Kaufman offers a simultaneously horrific and hilarious parody of the zombie genre that takes on the one thing scarier than the flesh-eating legions of the undead -- America's love affair with fast food. Arbie (Jason Yachanin) is a nostalgic romantic with little luck in romance and a bad case of puppy love. When Arbie's high-school sweetheart, Wendy (Kate Graham), returns home after her first year of college, the lovelorn teen attempts to win the object of his affections back by taking her to the site of their first romantic encounter. Unfortunately for Arbie, the ancient Tromahawk Tribe Indian burial grounds have been bulldozed to make way for an American Chicken Bunker restaurant, and Wendy has turned into a left-wing lesbian with a penchant for protesting. Subsequently beaten to a pulp by Wendy's rough-and-tumble girlfriend, Micki (Allyson Sereboff), and in desperate need of a steady job, disgruntled Arbie applies at the Chicken Bunker despite the fact that Wendy and Micki have launched a tireless campaign against the restaurant. But something supernatural is stirring in this poultry paradise; the spirits of the dead are not pleased that their eternal slumber has been interrupted. As the employees of the American Chicken Bunker begin dying a series of increasingly gruesome deaths, restaurant owner General Lee Roy (Robin L. Watkins) does his best to cover up the scandal and keep his customers in the dark. Meanwhile, the restless demons of the Tromahawk tribe vow to take revenge on the fast-food-loving masses by infecting every last piece of genetically modified poultry that is served at the Chicken Bunker. Perhaps if Arbie can prevent their curse from reaching beyond the drive-through window, he can save the world from a fate worse than trans fat and finally win back the girl of his dreams. ~ Jason Buchanan, Rovi

Critic Reviews for Poultrygeist: Night of the Chicken Dead

Audience Reviews for Poultrygeist: Night of the Chicken Dead