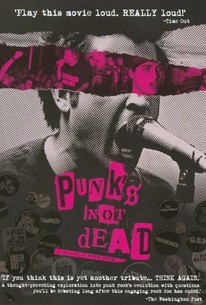 Susan Dynner's Punk's Not Dead is a thrilling and ambitious overview of the history and resilience of punk music, featuring interviews with an array of the genre's outspoken godfathers.

As the original DIY spirit of punk becomes increasingly watered down through commercialization and corporate influence, longtime photographer and Brick co-producer Susan Dynner explores the music's origins as a social movement uniting disenfranchised outsiders before tracing its breakthrough into the mainstream during the 1990s. In the 1980s, punk rock was strictly an underground movement, and for every Ramones, Clash, and Sex Pistols making a mark on the mainstream there were ten UK Subs and Subhumans delivering some of the most ferocious, outrageous music ever conceived. In the 1990s, the music that once shocked the masses gradually became commercialized through the likes of Green Day, Rancid, and Nirvana. By the time such bands as Good Charlotte and Sum 41 hit the scene in the first years of the 21st century, the vitality and urgency that once defined punk rock had largely been lost in radio friendly riffs and lyrics that were more concerned with typical teenage issues than the current state of politics and globalization. So what exactly happened to the non-conformist spirit of punk? In this documentary, Dynner speaks with such outspoken punk godfathers as Henry Rollins, Ian MacKaye, Jello Biafra, and others to find that, despite outward appearances, the rebellious spirit that originally defined this challenging genre of music is still very much alive.

The Used
View All

News & Interviews for Punk's Not Dead

Critic Reviews for Punk's Not Dead

Audience Reviews for Punk's Not Dead

There are no featured audience reviews for Punk's Not Dead at this time.