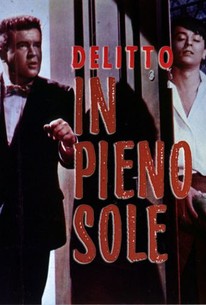 The talented Tom Ripley is brought to enigmatic life on the screen in Purple Noon, an exquisite thriller wherein the murderous social climber is embodied by an unnerving Alain Delon.

René Clément's thriller Purple Noon stars Alain Delon as Tom Ripley, an American who travels to Europe on an all-expenses-paid mission to convince his friend, the errant playboy Philippe Greenleaf (Maurice Ronet), to travel to San Francisco at the request of the wealthy Greenleaf family. Initially, the pair enjoy the good life in Italy, often to the anger and dismay of Philippe's much put-upon fiancee Marge (Marie Laforet). However, as Tom's funds begin to run dry, it becomes more and more apparent that Philippe has no intentions of returning to the U.S., forcing Tom to consider more nefarious means of maintaining his extravagant lifestyle. Purple Noon is adapted from Patricia Highsmith's novel The Talented Mr. Ripley, and like Alfred Hitchcock's classic Strangers on a Train, also based on Highsmith's work, the theme of identity transference is dominant. The subject even extends to the homoerotic undercurrents which simmer below the surface of Tom and Philippe's relationship, setting into motion a love/hate tension which explodes during a high seas journey. ~ Jason Ankeny, Rovi