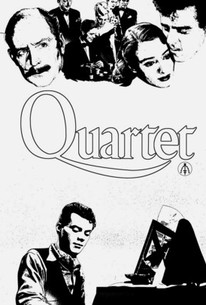 The first of three well-received "omnibus" films hosted by Somerset Maugham, Quartet features four of Maugham's most celebrated stories, each introduced by the author himself. In "The Facts of Life," a seemingly innocent British youth (Jack Watling) is targeted for a shakedown by a beautiful adventuress (Mai Zetterling), while Basil Radford and Naunton Wayne perform their usual brilliant byplay. In "The Alien Corn," a young aristocrat (Dirk Bogarde) hopes to become a professional concert pianist. "The Kite" tells the story of a preoccupied inventor (George Cole) who places his hobbies ahead of his wife (Susan Shaw) as an indirect means of defying his dominating mother (Hermione Badderly). The film concludes with "The Colonel's Lady," wherein the title character (Nora Swinburne) embarrasses her stuffy husband (Cecil Parker) by publishing a torrid volume of romantic poetry. Each of the short tales in Quartet possesses its own mood, pace and rhythm, and each is a gem in its own right. The popularity of Quartet resulted in two more Maugham compendiums, Trio and Encore, not to mention the multistoried American film O. Henry's Full House. ~ Hal Erickson, Rovi

Henry Edwards
as Duke of Cleverel

There are no featured audience reviews for Quartet at this time.