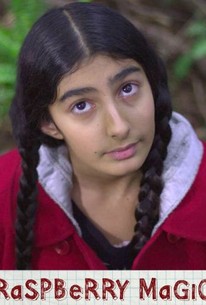 A young woman finds that science and faith can sometimes walk the same path in this family drama. Monica (Lily Javaherpour) is a high school student whose family is going through a run of bad luck -- her father Manoj (Ravi Kapoor) has lost his job as a computer programmer and can't find work, while her mother Nandini (Meera Simhan) is a free-lance writer who doesn't bring in enough money to support the household. The future for Monica and her folks hangs in limbo as she works on a project for a school science fair. Monica wants to prove that human touch can help prompt the growth of raspberry plants, and hopes her project will win out over a high-tech robot built by self-satisfied classmate Zach (Zachary Mills). As Monica puts plenty of hard work and belief into her experiment, she finds it reflects her parents' struggle to keep the family afloat, and she wants to win for their sake as much as her own. Raspberry Magic was the first feature film from writer and director Leena Pendharkar.

Maulik Pancholy
as Amrish
View All

There are no critic reviews yet for Raspberry Magic. Keep checking Rotten Tomatoes for updates!

There are no featured audience reviews for Raspberry Magic at this time.