Read it and Weep 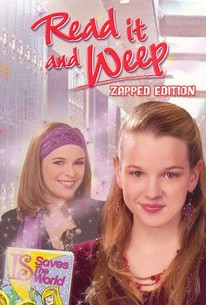 Read it and Weep

Read it and Weep Photos

Originally produced and aired during the summer of 2006 on The Disney Channel, the gentle, family-friendly teen comedy Read It and Weep constitutes an adaptation of Julia DeVillers' popular 2004 young-adult novel How My Journal Became a Bestseller. The film revolves around Jamie (Kay Panabaker), a pretty and intelligent high-school freshman, but also a complete wallflower who spends the majority of her time daydreaming and scribbling in her personal journal, and whose chances of entering the popular cliques are slim at best. Jamie carries a secret weapon, however: a brash and sharp-tongued alter ego named Isabella, or "Is" (played by Kay Panabaker's twin sister, Danielle Panabaker), who parades through the halls and classrooms of her high school with not an iota of self-doubt in her mind, and who manages, in no time flat, to throw her enemies into detention and win the devotion of the most popular boy in her school. Then, one day, Jamie's life turns a corner when, in an attempt to meet a class deadline, she accidentally turns in her private journal instead of a composition assignment -- and her teacher promptly turns it into a best-seller. Alexandra Krosney, Marquise C. Brown, Jason Dolley, and Nick Whitaker co-star; Patrick J. Clifton and Beth Rigazio co-wrote the adaptation.

Danielle Panabaker
as Is

Critic Reviews for Read it and Weep

Audience Reviews for Read it and Weep

Read it and Weep Quotes