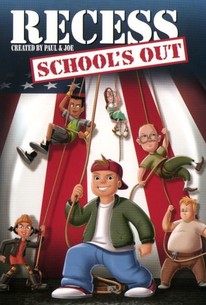 Though basically a TV cartoon stretched out to movie-length, Recess has enough successful jokes and smart writing to make it a worthwhile view.

The characters from the popular Saturday morning TV cartoon series move out of the schoolyard and onto the big screen in this animated feature. New kid Gus (voice of Courtland Mead), nice guy TJ (voice of Andrew Lawrence), tough girl Spinelli (voice of Pamela Segall), cool kid Vince (voice of Rickey D'Shon Collins), overly enthusiastic Mikey (voice of Jason Davis), and brainy Gretchen (voice of Ashley Johnson) are grade school best friends who are psyched about the end of the school year and the arrival of summer vacation. But Principal Prickly (voice of Dabney Coleman) is less than enthusiastic about letting the kids goof off all summer, and evil school administrator Dr. Benedict has come up with a plan to do away with summer vacation by using a super-powered laser to create permanent winter. Teen-pop singer Myra contributes a new version of "Dancing in the Street" to the soundtrack, and Katey Sagal also contributes to the voice cast.

Dan Castellaneta
as Guard No.1

Diedrich Bader
as Guard No.2

Gregg Berger
as Tech No.1

Ron Glass
as Dr. Lazenby/Tech No. 2

Andrea Martin
as Lunch Lady No.1

Anndi McAfee
as Ashley A

Jack Riley
as Golfer No.1

Phil Proctor
as Golfer No.2/Scientist No.2

Nicholas Turturro
as Cop No.1

Kevin Michael Richardson
as Cop No.2

News & Interviews for Recess: School's Out

Critic Reviews for Recess: School's Out

Audience Reviews for Recess: School's Out