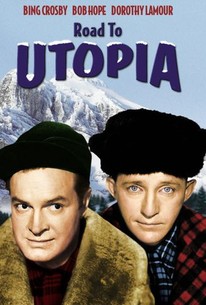 The first "Road" picture in three years (the last was The Road to Morocco), Road to Utopia is set during the Alaskan gold rush. Bob Hope and Bing Crosby play a pair of third-rate San Francisco entertainers, Chester Hooton and Duke Johnson, who are obliged to skip town in a hurry. They book passage on a ship to Alaska, where they run afoul of escaped murderers Sperry (Robert H. Barrat) and McGurk (Nestor Paiva). Through a fluke, Chester and Duke overpower the killers, then get off the ship in Skagway disguised as Sperry and McGurk so that they themselves can evade the authorities. The boys can't understand why everyone is so afraid of them, nor why saloon owner Ace Larson (Douglas Dumbrille) and Larson's moll Kate (Hillary Brooke) are so chummy. It turns out that Sperry and McGurk had stolen a deed to a valuable gold mine before escaping to Alaska. Sal Van Hoyden (Dorothy Lamour) is the rightful owner of that deed, thus she too shows up in Skagway, hoping to extract the document from Chester and Duke. Whenever the plot threatens to become too difficult to follow, narrator Robert Benchley shows up to explain things -- which of course only adds to the confusion. At any rate, the whole affair ends up with Chester, Duke, and Sal running through the snowy wastes, with the villains in hot pursuit. Duke nobly stays behind to fight off the bad guys himself, handing the deed to Chester and Sal and wishing them Godspeed. Flash-forward to 1945: Chester and Sal, both old and wealthy, are reunited with their equally aged pal Duke, who wasn't killed after all. Sal tells Duke that Chester has been a wonderful husband and father. Yes, father...and wait till you see who plays their child ("We adopted him!").

Will Wright
as Mr. Latimer

Jimmie Dundee
as Ringleader of henchmen

Stanley Andrews
as Official at boat

Brandon Hurst
as Man at Zambini's

Donald Gallaher
as Man at Zambini's

Donald Gallagher
as Man at Zambini's

Edward Emerson
as Master of Ceremonies

George McKay
as Waiter
View All

Critic Reviews for Road to Utopia

Audience Reviews for Road to Utopia