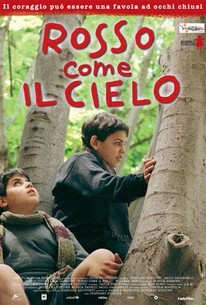 The film is inspired by the true story of Mirco Mencacci, one of the most gifted Italian sound editors working today, who happens to be blind. A small village in Tuscany, 1971. Mirco is a bright, lively 10-year-old, crazy about the movies - especially Westerns and adventure films. His father, an incurable idealist, is a truck driver. One day, while Mirco is playing with an old rifle, the gun accidentally goes off; the boy is shot in the head. He survives, but loses his sight. At that time, Italian law considered blind people hopelessly handicapped, and did not permit them to attend public school. Hence, young Mirco's parents are forced to shut their son up in a "special school for the blind": the David Chiossone Institute in Genoa. In the beginning Mirco does not accept his new condition. But he is feisty and determined. When he finds an old tape recorder and a few used reels and discovers that by cutting and splicing tape he can create little fairy tales made only of sounds, a brand-new world opens up to him. His new adventure is opposed by the religious authorities that run the boarding school, who are convinced that a blind boy is a disabled person who must not be allowed to harbor illusions. But Mirco will not give up. He continues to fight in every way possible, and he slowly involves his classmates, leading them to rediscover their dreams and capacities. Then one night, with the help of the only sighted child - the daughter of the doorkeeper, with whom Mirco shares a tender friendship - he convinces the small group of boys to sneak out of school and go to the cinema down the street. For all of them, the experience is exhilarating. But the consequences are grim. Mirco is expelled. In the meantime, a broader struggle to change society is taking place outside. 1970's political protests are erupting. Students are taking to the streets. During one of his earlier escapades, Mirco had made friends with Ettore, a blind university student with strong political awareness. Hearing that Mirco has been expelled, Ettore pushes the whole city to mobilize. Students and workers protest in front of the Cassone Institute, threatening to shut down the city's blast furnace if Mirco is not re-admitted. As a consequence, the head of the institute is put under investigation. Mirco is finally re-admitted and granted special permission: to change the year-end show. Instead of reciting the usual religious poems, the children put on a performance of their "fairy tale in sound", before an audience of blind-folded, spellbound parents.