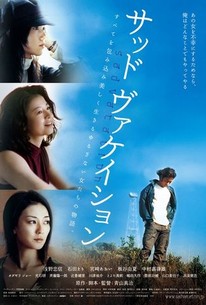 A damaged man experiences a series of odd coincidences that send his life careening down a path he never anticipated in director/screenwriter Shinji Aoyama's semi-sequel to his critically acclaimed 2000 drama Eureka. When Kenji was just a young boy, his mother abandoned the family and his father committed suicide. These days Kenji (Tadanobu Asano) can't seem to hold down a regular job, instead choosing to work part time as a designated driver for tipsy bar hostesses and their randy clients. Occasionally, he even assists local gangsters in trafficking illegal immigrants. Everything changes for Kenji, however, when in just a matter of days he meets both the woman who will bear his future child as well as his own long-missing mother Chiyoko (Eri Ishida). Now, as Kenji ponders the depressive realization that his mother left he and his father behind in favor of starting a new family, the past and the future come crashing together, forcing the uncertain drifter to try and make sense of his own fractured existence. ~ Jason Buchanan, Rovi

There are no featured audience reviews for Sad Vacation at this time.