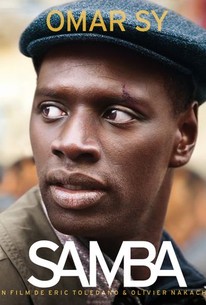 Samba isn't the finest effort from directors Olivier Nakache and Eric Toledano, but the film's shortcomings are partly balanced by its big heart and talented cast.

From the acclaimed directing duo of Olivier Nakache and Eric Toledano (The Intouchables), Samba is the richly entertaining chronicle of an undocumented kitchen worker battling deportation from his adopted home in Paris. For ten years, Senegalese immigrant Samba (Omar Sy - winner of the 2012 César Award for Best Actor) has stayed under the government radar, taking menial kitchen jobs in the hope of becoming a professional chef. Suddenly, as his longtime ambitions for a better life seem just within reach, immigration authorities hit Samba with an order to leave France immediately. Stubbornly holding onto his dream, Samba pins his hopes for a reprieve on a local immigration advocacy center and Alice (Charlotte Gainsbourg), an emotionally vulnerable volunteer with little experience, but plenty of heart. He finds a second home at the center with Alice and her colleagues, including brusque law student Manu (Izïa Higelin), do-gooder Marcelle (Hélène Vincent) and naïve Maggy (Jacqueline Jehanneuf), as they search for a way for him to stay in France. As Samba plunges into the unpredictable world of transient labor, guided by his fun-loving Brazilian buddy Wilson (Tahar Rahim), Alice finds herself deeply moved by his determination. Still trying to put her own life back together after a stress-related breakdown, she takes Samba under her wing, while trying to ignore the growing attraction she feels for him. As the immigrant and the burned-out corporate executive tentatively draw closer, their unlikely cross-cultural connection gives them each the courage to reinvent themselves in this vibrant romantic comedy full of tender humor and heartfelt optimism. (C) Broad Green

Despite Visual Flash, Pixels Isn’t Worth Your Quarters
View All

There are no featured audience reviews for Samba at this time.