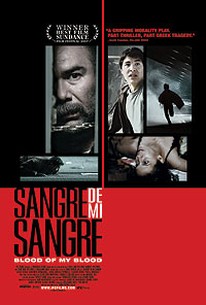 This suspenseful Mexican drama portrays the immigrant experience with grit and poignancy.

Writer/director Christopher Zalla authored and helms the contemporary post-noir thriller Blood of My Blood. The film concerns Juan, a ruthless and conniving ex-career criminal who tries to escape his past by hopping a truck transporting illegal immigrants from Mexico to the Big Apple. Over the course of his journey, Juan meets and befriends Pedro, a sweet but illiterate Puebla native -- long-estranged from his father, Diego -- who harbors a strong desire to make contact with his dad and holds a letter of introduction from his mother to help him accomplish his goal. The naïve Pedro falls into the clutches of the sociopathic Juan, who promptly wins his confidence, then rips off all of his belongings during the night and attempts to steal his identity, plotting to fallaciously present himself to Diego as the gentleman's son. The film then cross-cuts between the story of each man (one desperate, the other slick and arrogant) as they each seek out food and shelter and comb the city for the man in whom they see a chance to establish a secure future. ~ Nathan Southern, Rovi