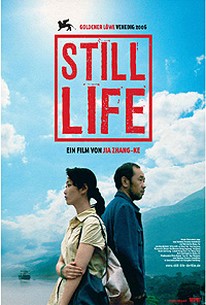 Jia Zhang Ke's haunting minimalist drama Still Life (aka Sanxia Haoren) takes as its focal point the real-life construction of the Three Gorges Hydro Project and it accompanying massive dam over the Yangtze River in China (allegedly the largest manmade dam in the world) -- a project that required engineers to flood the surrounding territories, including the two millennia-old city of Fengjie. Jia interweaves two stories in connection with the geographical transformation of that area. In the first, Han Sanming (Han Sanming), a miner from northern China, revisits the vicinity after a 16-year absence and attempts to find his wife and his adult daughter -- trying to locate them at addresses that now exist underwater. In the second story, nurse Shen Hong (Zhao Tao) also returns to the site of Fengjie and scours the area for her husband, who has been estranged from her for two years, and who, it seems, has become consumed by the work and lifestyle of an executive. The marriage, it turns out, is irreparable. Meanwhile, as a documentary-style backdrop to these stories, the old structures of Fengjie are continually destroyed -- walls brought to crumbling heaps, towers blown to bits -- and new, makeshift structures installed as replacements. The film thus becomes a sad-eyed meditation on the nature of social change and progress, but it is one that requires the audience to extract these deeper themes and tropes on its own, via inference and deduction. ~ Nathan Southern, Rovi

L.A. Critics Love WALL-E, The Dark Knight
Critics’ Consensus: Cloverfield is Monstrously Fun, 27 Dresses Fails to Impress, Mad Money Not Worth Much
RTIndie: An Art-House Catfight for the Oscars?
View All