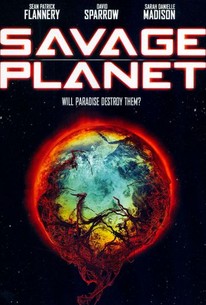 Planet Earth has been rendered inhabitable due to decades of toxic pollution and ecological disaster, and as a brave team of scientists venture out into space in search of a new home, they discover that the only habitable planet in range is home to a carnivorous, man-eating mutant. Mankind has abused their planet beyond the point of no repair, and now Mother Nature is wheezing out her final, strained death rattle. Perhaps if space explorers could just find a planet with a similar atmosphere to Earth, there would be hope for mankind yet. Upon landing on a planet lush with abundant foliage, it appears as if the human race will indeed continue on. But the deadly secret lurking just beneath this otherworldly paradise is enough to make their scorched home planet look like an island resort. Suddenly forced to choose between returning to a dying planet or fighting for their lives in the farthest reaches of space, the crew struggles to make a decision as the ranks begin to thin and hope starts to dwindle.

There are no critic reviews yet for Savage Planet. Keep checking Rotten Tomatoes for updates!

There are no featured audience reviews for Savage Planet at this time.