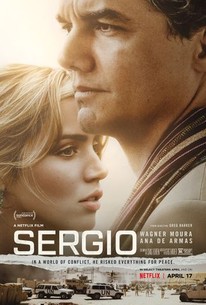 While the real-life story that inspired Sergio is certainly worthy of a biopic, its misguided approach to its noble subject adds up to a disappointingly shallow drama.

Charismatic and complex, Sergio Vieira de Mello (Wagner Moura) has spent the majority of his storied career as a top UN diplomat working in the world's most unstable regions, deftly navigating deals with presidents, revolutionaries, and war criminals for the sake of protecting the lives of ordinary people. But just as he readies himself for a simpler life with the woman he loves (Ana de Armas), Sergio takes one last assignment -- in Baghdad, newly plunged into chaos following the US invasion. The assignment is meant to be brief, until a bomb blast causes the walls of the UN headquarters to come literally crashing down upon him, setting into motion a gripping life-or-death struggle. Inspired by a true story, SERGIO is a sweeping drama focused on a man pushed to his physical and emotional limits as he's forced to confront his own divisive choices about ambition, family, and his capacity to love.

Will Dalton
as Sgt. Andre Valentine

There are no featured audience reviews for Sergio at this time.