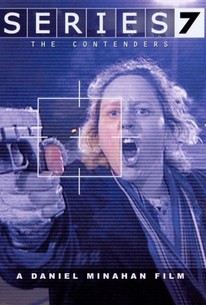 Boasting no big-name stars, Series 7 is surprisingly well-acted. Its timing is impeccable, with its dark humor casting shadows over the enjoyment and popularity of today's reality-TV shows.

In this take-off on reality television programs (shot on digital video), a show entitled "The Contenders" has just selected six people at random for the high-rated series. Their mission: to assassinate one another until there is one lone survivor. Among the contestants are Dawn (Brooke Smith), the reigning champion who claims ten kills in two tours thus far -- and who also happens to be eight months pregnant; Tony (Michael Kaycheck), a blue-collar family man; Connie (Marylouise Burke), an emergency-room nurse who strongly believes in God; Franklin (Richard Venture), an aging conspiracy theorist; Lindsay (Merritt Wever), an average 18-year old high schooler with a set of interfering parental units; and Jeff (Glenn Fitzgerald), an artist dying of testicular cancer who also happens to be the long-lost love of champ Dawn (which is why the show's producers forced them to reunite under such odd circumstances). "The Contenders" must learn to outwit each other and create effective diversions in order to protect themselves, particularly Dawn, who is fighting for not only herself, but her unborn child as well. Series 7 is the debut feature from screenwriter Daniel Minahan (I Shot Andy Warhol).

Robin Borden
as Doria Lookalike No. 1

Lauren Ward
as Doria Lookalike No. 2

Aydin Bengisu
as Jeff Lookalike No. 1

Josh Mosby
as Jeff Lookalike No. 2

Will Arnett
as Narrator

Critic Reviews for Series 7: The Contenders

Audience Reviews for Series 7: The Contenders