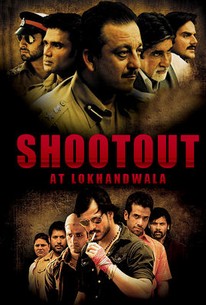 Director Apoorva Lakhia teams with screenwriters Suresh Nair and Sanjay Gupta to offer a harrowing account of the stand-off that found suburban Mumbai transformed into an urban war zone. The year is 1991, and as the summer sun shines down on the Lokhandwala Complex, five hardened thieves count their most recent take in flat 32B. The sum is substantial, yet this skilled team of extortionists led by criminal masterminds Maya and Dilip will never live to enjoy the fruits of their nefarious labor. Just outside, 286 heavily armed policemen await permission to open fire; when that permission is granted by renegade lawman ACP Khan, this history of this city will be changed in the time it takes to pull a trigger. Six hours later, when the smoke cleared on the massacre, the criminals who raised a red flag within Khan's newly formed ATS squad for daring to go against the most fearsome figures in the underworld would finally be off the streets - but at what cost? A hardened policeman who recruited only the most fearless lawmen to aid him in taking down ruthless Khalistini extremists, Khan would later be charged with multiple human rights violations for his reckless bravado in addition to becoming the subject of an inquisition from his own department. ~ Jason Buchanan, Rovi

Critic Reviews for Shootout at Lokhandwala

Audience Reviews for Shootout at Lokhandwala