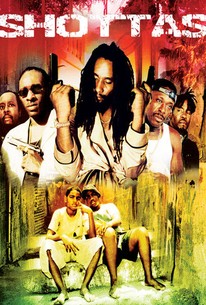 Kingston, Jamaica is a breeding ground for great music, great food, great style and great shottas--young, homegrown Jamaican gangsters. Biggs and Wayne grew up together on the tough and dangerous streets of Kingston. Hoping for a better life, with limited possibilities on the horizon, they rob a soda truck and manage to grab enough money to purchase visas to take them to a better life in the United States. Their dream doesn't go as planned. After hustling in the drug world of Miami gets them into trouble, the young men are deported--sent back to Jamaica with empty pockets and dashed hopes. But shottas can always find a way. Back home, with the complicity of local politicians and the export money from local businesses, they start building their way back to the lifestyle they had made for themselves in Miami. All goes well until the crime rate surges as rivals in Kingston's underworld resent their new homegrown success. The heat is on to put an end to the cycle of crime and violence, and a local politician, in exchange for his life, arranges to buy visas back to the States so Biggs and his crew can re-establish themselves in Miami. The growing body count from warfare instigated by their powerful return to the Miami scene carries a heavy burden, a burden that only a shottas can bear.

Critical Consensus: "Borat" Best Reviewed Film Of Year: High-Five!; "Flushed Away" Worth A Spin; "Santa Clause 3" Gets Coal
View All