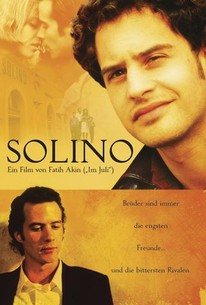 Out of work in 1964, Romano Amato (Gigi Savoia) packs up his young family and heads to Duisburg, Germany, in hopes for a better future for them. Shortly after arriving, Romano takes a job mining coal but quickly loses interest in that endeavor. His wife, Rosa, (Antonella Attili) takes matters into her own hands and opens an Italian restaurant, Solino, named after the small town in Italy from which they moved. As Romano and Rosa focus nearly all of their attention on the somewhat successful Solino, their young sons, Gigi and Giancarlo, are forced to fend for themselves as they acclimate to their new country, developing their own interests and hobbies in the meanwhile. Ten years later, with the boys now young men, Romano spells out his intentions of having Gigi and Giancarlo join him in the family business, but neither have much interest in the industry. As the family sorts out its disagreements, each family member tries to come to terms with their Italian heritage, as well as with their roles in German society. Solino was screened in the German Cinema program for the 2003 Berlin International Film Festival.

There are no critic reviews yet for Solino. Keep checking Rotten Tomatoes for updates!

There are no featured audience reviews for Solino at this time.