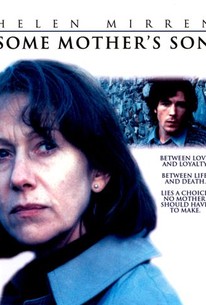 A 1981 hunger strike in a Belfast prison is the historical inspiration for the drama Some Mother's Son, which attempts to focus on the personal dimensions of the event through its portrayal of the families of the striking prisoners. Directed by Terry George, co-author of In the Name of the Father, the film is anchored by Helen Mirren's performance as Kathleen Quigley, an educated, thoughtful schoolteacher who feels the Irish-English conflict is remote from her life until her son is arrested for his involvement with the Irish Republican Army. Yet while she supports her son and works to save his life, Kathleen nevertheless maintains her disdain for violence. This is in great contrast to Annie Higgins, the mother of Gerard's collaborator, who wholeheartedly embraces the IRA's mission. Despite their differing philosophies, the women form an uneasy bond over the suffering of their imprisoned sons. Kathleen finds herself increasingly politicized but finds herself facing a moral dilemma when the prisoners begin a hunger strike. As Gerard's next of kin, it is her right to agree to intravenous feeding should her son enter a coma; however, many people, including Annie, would see such as an act as betrayal of the strike, leaving Kathleen with a choice between saving her son's life and respecting his cause.

Deirdre McAliskey
as Woman in Court

Critic Reviews for Some Mother's Son

Audience Reviews for Some Mother's Son