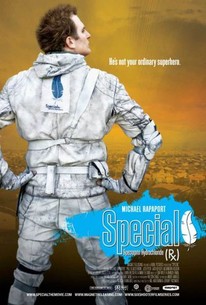 Les Franken is a kind-hearted and soft-spoken man who loves reading comic books. He's the type of guy who most people walk by on the street without even noticing; in essence, he's completely average and virtually invisible. However, everything changes for Les the day he is accepted into an experimental drug study for a new and exciting anti-depressant, Specioprin Hydrochloride. As Les begins to take the drugs an unexpected side effect occurs--he begins to develop special powers: the ability to levitate, to read peoples' minds, and even walk through walls. Faced with the dilemma of how best to utilize his new "powers," the answer seems obvious to Les. He puts together a homemade superhero suit and hits the streets to fight crime and protect the world from the forces of evil. Surveillance video soon exposes Les and his actions to the public via television news and therefore brings him to the attention of the businessmen developing the drug. Worried about the bad publicity Les is bringing to their new anti-depressant, they attempt to put an end to his superhero antics before too much damage is done. However, in typical comic book fashion, Les sees the men from the drug company as his evil arch nemeses--"The Suits"--men who want him to join them in their evil plan to use 'Special' to create an army of unstoppable assassins. Les refuses to play ball.

Alexandra Holden
as Maggie
View All