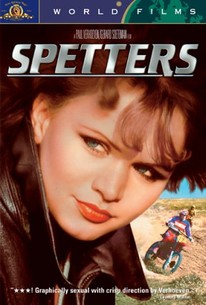 Spetters further elaborates on the themes of sexual obsession previously probed in director Paul Verhoeven's Turkish Delight (1973). Hans Van Tongeren, Toon Agterberg and Maarten Spanjer play, respectively, Reen, Eve and Hans, a closely-knit group of teenage motorcycle lovers who idolize local cycling champion Witkamp (played by Rutger Hauer, the star of Delight). Unfortunately, the adolescents' attempts to rebel take a dark and brutal turn when Van Tongeren is permanently injured in a road accident and Agterberg is gang raped by a group of homosexuals. While the other two young men lust after Fientje (Renee Soutendjik), a promiscuous hashhouse waitress, Agterberg responds to the rape by coming out and taking Fientje's gay brother as a lover. Verhoeven is artistically and sexually graphic in juxtaposing "cycle love" with the friends' carnal interrelations. The title of Spetters is an indigenous triple-entendre -- it refers to the Dutch vernacular for "grease spatterings" (both the oily renderings left behind by the motorcycles commandeered by the film's central characters and the grease slung by Soutendjik), is a slang term for male ejaculate, and was frequently used in the seventies and eighties to refer to people who are sexually appealing ("That girl is a spetter.") ~ Hal Erickson, Rovi