Spirit - Stallion of the Cimarron 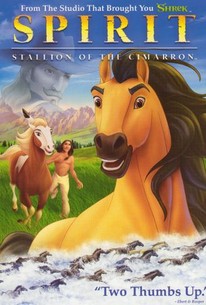 Spirit - Stallion of the Cimarron

A visually stunning film that may be too predictable and politically correct for adults, but should serve children well.

Spirit - Stallion of the Cimarron Photos

Screenwriter John Fusco returns to the Western themes of his previous films Young Guns and Thunderheart with this animated children's adventure from Dreamworks. Matt Damon supplies the voice of Spirit, a wild Mustang stallion living free in the Old West of the late 19th century, where he's captured by human horse traders and sold to a cavalry regiment at a frontier outpost. There, a cruel colonel (voice of James Cromwell) nearly succeeds in breaking the willful horse, but not quite. Spirit escapes in the company of another captive, Little Creek (voice of Daniel Studi), a Native American youth that tries to possess the magnificent animal by more humane means, but Spirit refuses to bend to human will even when he makes the acquaintance of Little Creek's beautiful and fiercely loyal mare, Rain. After he saves Little Creek's life in an Army raid, Spirit believes that the gravely injured Rain has perished after a tumble over a waterfall. Despondent, the horse is captured again by humans, enslaved this time for work in a pack team on the transcontinental railroad. Undaunted by the tragedies that befall him, Spirit manages to escape for a reunion with Little Creek, Rain, and his long-lost brethren. Featuring songs by rock singer Bryan Adams, Spirit: Stallion of the Cimarron departs from other examples of its genre in that the horse protagonists do not speak or sing; only Spirit's voice is heard as voice-over narration.

James Cromwell
as The Colonel

Critic Reviews for Spirit - Stallion of the Cimarron

Audience Reviews for Spirit - Stallion of the Cimarron

Spirit - Stallion of the Cimarron Quotes