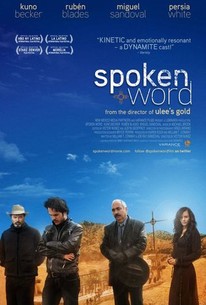 From acclaimed director Victor Nunez ("Ulee's Gold"), SPOKEN WORD tells the story of Cruz Montoya (Kuno Becker, from the "Goal!" trilogy and "From Mexico With Love"), a rock star on the West Coast poetry circuit, where audiences from San Diego to Seattle gather to hear him perform. Just off the road from a successful tour, Cruz gets an unexpected call alerting him that his father, Senior (played by Rubén Blades), is fatally ill. Cruz rushes home to his dying father, a reclusive former schoolteacher still leading a traditional life in their once bucolic mountain valley, now ravaged by poverty, drug abuse, and violence. After years away, Cruz quickly begins to retreat into his troubled former life, managing a Santa Fe hip-hop club owned by a local crime boss, Emilio (Miguel Sandoval, "Bottle Shock" and "Clear and Present Danger"), who Senior used to run with back in the day. Seduced by the fast action and easy money, Cruz loses his poetic voice, his identity, and almost his life, before he finds a way to heal his relationships with his family, his community, and himself. A nuanced depiction of an evolving father-son relationship, SPOKEN WORD depicts the edgy collision of old and new worlds in a rare, authentic portrait of Latino culture in the Southwest, illustrating how cultural roles and machismo can give way when families can move beyond words, both spoken and unspoken, to share the language of their hearts. -- (C) Official Site

Stephen A. Eiland
as Big Mike

Rick A. Ortega, Jr.
as Sandoval

Myrna I. Vigil
as Josephine

Casey Messer
as Cheryl
View All