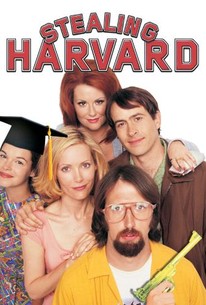 There are laughs Stealing Harvard, but they are few and far between. Tom Green's antics grow old fast.

Two buddies find themselves doing some very wrong things for perfectly right reasons in this broad comedy. John (Jason Lee) is a nice guy who is responsible and hardworking; his best friend Duff (Tom Green), however, is his polar opposite, a layabout who is constantly getting in some sort of trouble. John is very much in love with his longtime girlfriend Elaine (Leslie Mann), and wants to marry her, but true to form, he has pledged not to make the walk down the aisle until he has saved up to 30,000 dollars so they'll be able to afford a down payment on the house they've always wanted. After years of saving, John has finally put 30 grand in the bank, and has set the date with Elaine. However, as John's big day approaches, he gets word from his sister Patty (Megan Mullally) that her daughter Noreen (Tammy Blanchard) has been accepted into Harvard University -- and years ago, John promised her if she got into the prestigious college, he'd pay the tuition. Making good on John's pledge to his niece would leave him with a mere 121 dollars in the bank, but he doesn't have the heart to say no to Noreen, or tell Elaine of his dilemma. John does tell Duff about his problem, who comes up with a typically hare-brained solution -- turning to a life of crime for the next two weeks in order to steal another 30,000 dollars. Stealing Harvard costars Dennis Farina and Chris Penn; Bruce McCulloch, a member of the comedy series The Kids in the Hall, served as director.

Bruce McCulloch
as Fidio the Lawyer

Shane Wayton
as Kid in Tree