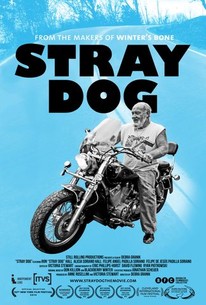 Debra Granik could have gone in any number of directions after the success of Winter's Bone. For her follow-up, Stray Dog (winner of the Best Documentary at this year's Los Angeles Film Festival), Granik created a documentary portrait of Ron "Stray Dog" Hall (who played Thump Milton in the 2010 film), an aging biker and RV park manager from southern Missouri. When we are introduced to Hall and his friends, they appear to be the very image of "middle America" held by New Yorkers: hard-drinking (moonshine, no less), gun-toting, tattooed motorcycle freaks. Slowly, gradually, another image comes into view, of a man who has been permanently altered by his tours of duty in Vietnam, who has come to terms with himself and acquired a rare wisdom and patience in the process, and who is now dedicated to helping his friends, his loved ones, and his fellow vets. This is a moving film fabout community and the bonds that hold it together; in its surprising second half, when the children of Hall's Mexican wife arrive in Missouri, it is also a vivid snapshot of a changing America. (C) Sundance

Critics Consensus: Terminator Genisys Is Bombastic and Confusing
View All

There are no featured audience reviews for Stray Dog at this time.