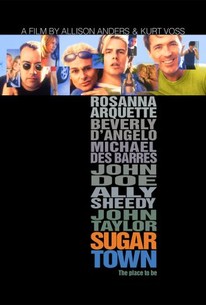 Ten years after Allison Anders and Kurt Voss collaborated on Border Radio, a gritty and evocative look at life along the margins of the L.A. punk rock scene, the two have reunited for another look at the California music biz, this time aiming their sights considerably higher up the ladder. Sugar Town follows the interconnected lives of a handful of power brokers, wanna-bes and has-beens. Gwen (Jade Gordon), a self-centered would-be rock star who will do anything to further her career, is working as an assistant to production designer Liz (Ally Sheedy), but when Gwen discovers Liz has a date with famous producer Burt (Larry Klein), any loyalty she has to her boss immediately goes out the window. Burt's latest project is a comeback attempt from three aging Brit-rockers, Nick (Michael Des Barres), Clive (John Taylor), and Jonesy (Martin Kemp). Clive is married to Eva (Rosanna Arquette), an actress and one-time sex symbol depressed over her latest job offer -- playing Christina Ricci's mom. Nick has a dilemma of his own -- the band is strapped for cash, and Jane (Beverly D'Angelo), a potential investor, will write them a check only in exchange for sex with Nick... who unfortunately is only attracted to teenage girls. On the other side of town, Carl (John Doe) is a session musician with a pregnant wife (Lucinda Jenney), a flock of kids to support and bills to pay. When he's offered a spot in the touring band of a popular Latina singer, Rosio (Lumi Cavazos), Carl is torn -- his wife wants him to take the job, but Carl knows Rosio wants him for sex as much as music. Sugar Town, which premiered at the 1999 Sundance Film Festival, is authentically cast with many real-life rock musicians, including Doe (a member of L.A. punk legends X, and co-star of Border Radio), Taylor (from Duran Duran), Kemp (ex-Spandau Ballet), Des Barres (who has sung with Silverhead, Chequered Past and The Power Station) and Klein (a bassist and producer who's worked with Peter Gabriel and Joni Mitchell). ~ Mark Deming, Rovi

Marion Moseley
as In Utero Baby

Catherine Munro
as Groupie No. 1

Kristina Hayes
as Groupie No. 2

Alyse Pozzo
as Groupie No. 3

Simon Bonney
as Band Member No. 1

Kelly Jones
as Band Member No. 2

Lacey Rodine
as Groupie No. 4