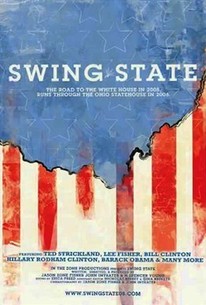 Filmmakers Jason Zone Fisher and John Intrater trace the 2006 Ohio Governor's race while focusing on the campaign of career politician Lee Fisher (Jason's father) in particular in this political documentary with a difference. In this film, Fisher and Intrater take a look into the private lives of the candidates, simultaneously focusing on the career of Democratic Gubernatorial Candidate and U.S. Congressman Ted Strickland. In 1998, a 14-year-old Jason had filmed his father's narrow loss for Ohio Governor. Eight years later he weaves that footage into a look at the 2006 race, and his father's last shot at realizing his lifelong dream. The six-month journey isn't an easy one, because in that time the entire Fisher family will learn just how cruel and exhausting a career in politics can be. Additional interviews with Bill Clinton, Hillary Rodham Clinton, Barack Obama, John Kerry, and more pay testament to that harsh reality, while time spent with the Fisher family show how the tension of the race actually brought the family closer together than ever before.

There are no critic reviews yet for Swing State. Keep checking Rotten Tomatoes for updates!

There are no featured audience reviews for Swing State at this time.